Chat with Chris Anderson, author of The Long Tail 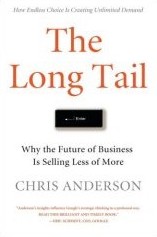 Back in October 2004, Wired editor-in-chief Chris Anderson penned one of the most influential magazine articles of recent times, "The Long Tail." The Wired cover story explored the impact that improved searching and better filters have had on selling products and services, making it possible to profit from items that aren't "hits" in the Top 100 sense. Increasingly, Anderson suggests, niche products that alone sell relatively few units will together make up the majority of sales for many businesses.

The idea has become one of the most popular memes for bloggers who write about business and culture, and over the past 20 months has taken hold in the mainstream as thinkers and consumers alike realize the implications of the shift. And Hyperion has just published Anderson's book The Long Tail: Why the Future of Business is Selling Less of More in hardcover.

On Monday, July 24 at 1:30 PM PDT, we'll be hosting a moderated SkypeCast discussion with Anderson.  To participate, all you'll need is Skype and this link:  skypecasts.skype.com.  We couldn't be more excited about this event!

In the meantime, check out our interview with Anderson over on featured.typepad.com, where he talks about how he used his TypePad blog to expand on the ideas in the original Wired article, connect with his readers and evolve his thinking about Long Tail economics.