A brief interview with Alex Ross 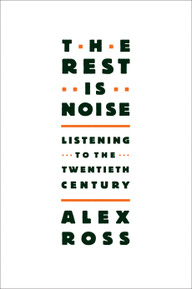 If you're a fan of modern classical music, then you probably already know all about Alex Ross, the music critic for The New Yorker magazine, his TypePad blog, and his just-published book The Rest is Noise: Listening to the Twentieth Century.  If you're not (yet) a fan, Ross' writing is a great place to learn about the connection between West Side Story and Schoenberg's 12 tones, or the path from Jean Sibelius to John Coltrane.

After Ross recently published a piece in The New Yorker about how blogging (and the Internet more broadly) is helping classical music, we decided to catch up with him and ask him a couple questions about his own blog writing and reading...

I often ask this myself. I do have a very nice day job, after all, at the New Yorker. But I find it irresistible. The blog allows me to indulge in a kind of writing that I couldn't pull off anywhere else — a little bit sly, a little bit whimsical, a little bit aphoristic, a little bit poetic, some days nothing more than a photo, other days a fragment of an essay. It's a very "now" medium, but it also somehow harks back to the nineteenth century when authors would publish bits and pieces of treatises and diaries in the columns of newspapers. After a while, with the fascinating suggestions coming in from readers, the blog more or less writes itself!

Q: What music blogs are you reading lately?

I'm reluctant to pick out a few music blogs for fearing of slighting others, but here goes. In my recent New Yorker piece I singled out Jeremy Denk's blog Think Denk, a compulsively readable mix of close musical analysis and personal confession. There's never been anything like it. I also regularly check in on Sid Chen's The Standing Room, which casts a very smart and sly eye on the classical world. Sid recently "outed" himself after several years of anonymous blogging: he's the artistic administrator of the Kronos Quartet.

Soho the Dog is the deliriously inventive blog of the composer and critic Matthew Guerrieri. As often in the classical blogosphere, the deeply serious mixes with the deeply zany. We're all waiting the next installment of Matthew's ongoing graphic novel, "Strauss and Mahler Re-Enact Your Favorite Movie Moments." And, for fear of devastatingly sardonic reprisals, I must cite the queen of opera bloggers, La Cieca, who knows which sopranos are about to have "procedures" and which tenors are about to go bananas — and is a brilliant opera critic on the side.

Many thanks to Alex, and here's to continued success with his column, his book and, of course, his blog!