Guest Post: Why Did I Write the ABCs for Expectant Dads?

The following guest post is from author and longtime TypePad blogger, Todd Lieman, who wrote the reference book, ABCs for Expectant Dads. 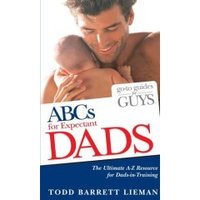 “What the heck have I done?”

That’s one of the first reactions I had after sharing the “line on the stick moment” with my wife. (Which is shortly followed by, “I really hope it’s mine.”) When you see that line and know your partner is pregnant, there is (usually) immediate joy. Then fear. Then insanity. Then the questions. What do I do next? Who do I turn to? Will I ever play golf again? What the hell is an episiotomy? (Don’t even get me started on the “mucous plug.”

Becoming a father for the first time is an exciting time for any man (provided, you know, it’s on purpose, and that you and the woman carrying your baby aren’t in high school…or cousins). As the time passed (and my wife grew), I quickly realized that I didn’t know the first thing about pregnancy or what to expect. My wife, on the other hand, started studying for the pregnancy with all the vim and vigor of a Harvard educated med student. She had magazines, books, Web sites and friends to turn to, all of which were loaded with what seemed like great information. She was going to be prepared.

As for me? I had no idea what to think or expect.

Inspired by my wife, I went to the big chain bookstores and some of the smaller independent bookstores in our area to look for a few resources of my own. I started in the magazine section — figuring there had to be a magazine for dads. Not so much. It seems that “parenting” magazines are really just code for “motherhood” magazines (though, someone did point out that “Parenting Magazine” has a — as in one — column for dads). Imagine my euphoria at discovering that there was really nothing out there for me!

So, off to the books, I went. And I was equally disappointed. What struck me is that there are lots and lots and lots of books on fatherhood (typing “fatherhood” into Amazon.com yields more than 450 titles), but none that are the equivalent of Vicki Lovine’s The Girlfriend’s Guide to Pregnancy.

There was no Fatherhood Bible (or if there were – it was WAY too touchy-feely for me). No absolutely go-to book that every dad reads. That every dad recommends. And that every veteran father gives to his new dad friends (along with the ubiquitous “poor bastard” comments and carton of politically correct bubble-gum or chocolate It’s A Baby! And It’s Taken Over My Wife’s Boobs! cigars).

And then it dawned on me: We’re guys. We don’t want to read all the details. We don’t want the play-by-play. We know the basics: We have sex, we get pregnant, we get big, we get baby. I didn’t necessarily want to read a book by another dad about his experiences. I did not want to be told what to think or feel or how to react based on other men’s experiences. I wanted a reference guide. Something that I could go to when my wife started throwing around words that I didn’t understand. (Be honest – how many of you already know what an APGAR Score is? Exactly.) A guide that I not only could run to after a visit to the OB/GYN, to look up all the words I didn’t understand (and there were lots of them), but also provide a little insight into things like “hell night.” I also I did not what something so technical that I needed an Ivy League medical degree to understand it. I wanted something that might actually use a little humor here and there while dispensing the information. My life is about to get completely turned upside down – how about a little laugh, people!

I figured if I couldn’t find exactly what I wanted to read, I’d start writing it myself. I started blogging about my experiences, and ultimately, along with my kid, The Go-To-Guides for Guys: ABCs for Expectant Dads was born. There’s no timeline of what to expect in the first month, the second month, the third month and so on. Those books exist, and some are even highlighted within the pages of the ABCs for Expectant Dads. This book is for those dads who really want to read as little as possible, but know enough to get by.

That’s my story, I’m sticking by it!

*Note: For our San Francisco Bay Area readers, Todd will be doing a reading from his book at the Barnes & Noble in Marin on January 19th.