Team TypePad at the AIDS/LifeCycle 7

Two of our Six Apart staffers rode in the recent AIDS/LifeCycle 7, a 545 mile fundraising ride from San Francisco to Los Angeles, and we're so proud of them we wanted to tell you their story.

TypePad has a history with the ALC event, with this being staffer Jamison's third ride and also (thanks to Jamison) the third year the event has been chronicled on the ALC TypePad blog.  With over 3,000 participants (2,500 cyclists and 500 roadies) this was the first year the event actually had to close registration because they got so many riders! 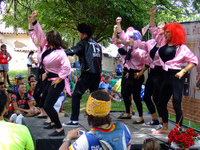 On the ALC7 blog, five participants reported from the event through personal stories, daily video podcasts and photo albums.  The ride days were long, anywhere from 40-100 miles a day for seven days, but as you can see the roadies took care to offset the grueling days with a lot of humor at each rest stop.

It was Six Apart staffer Alex's first ride, and although dehydration downed him on day three, he rallied and finished and has already signed up for next year!  Jamison used Blog It to post updates from the road all week to his blog and to Twitter, as his only internet access was via his iPhone.  "Blog It was awesome," said Jamison, "especially when Twitter was down because it saved the updates and posted them when it was back up!" 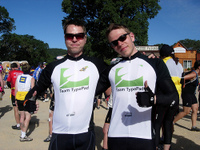 This year's ride raised a staggering $11.6 million at ride out, but donations are still coming in.  Each rider is required to raise $2,500 minimum to participate, and Alex rang in at $3,655 while Jamison raised $5,210.  Together Team TypePad raised $8,865!  If you feel compelled, you can still make donations to their fundraising efforts (maybe even help them break $10,000?)

Good Job guys, way to go. Everyone can do their part to help. I think you will enjoy the piece that I did on The AIDS Service Center event- A Taste of Art, currently on my homepage at www.culturaldiplomat.com. Best, Alan