Typepad Showcase Learn More Heart Pricing & Sign-Up Login Need help?
AutoSave to the rescue
Give One, Get One

We're particularly excited about this feature because it's one of the top requests from customers, both for post management and SEO purposes.  For those of you that don’t know, SEO stands for “search engine optimization”, which is the process of improving your blog’s page rank within search result pages. Whether you want to use filenames to improve SEO or you just want more control over your content, we've now made it easy for you to edit the URLs of your posts.  Over the coming week, this feature will be rolled out to everyone on the new platform .

Previously, the filename of your post was automatically generated when the post was first saved (either as draft or when published). The filename generated was based on the 'originating' title of the post.  Thus even if you edited the title of the post, the filename would always remain the same.  Those of you who often use drafts understand what a big pain it is to not be able to edit those 'temporary' URLs that you had in draft.

Now you can specify the filename of the post while you’re in Compose, as well as edit the filename of the post anytime afterwards. Additionally you can edit old and new post filenames.  If you’ve edited page filenames in the past, this feature will work in exactly the same way.  This is the first of many SEO improvements to come, so stay tuned to future releases.  Happy posting! 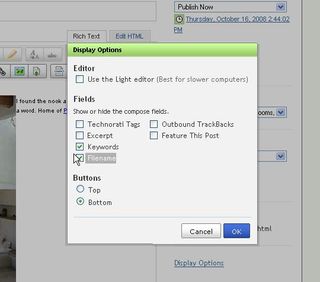 There is a small group of you whose blogs are still in the process of being migrated to the new platform (we want to make sure we make the transition as smooth as possible for you) but we should be on track, as Ben predicted, to have everyone on the new platform by the end of the year.

It will be great to be able to use this feature -- hope I'm migrated soon!

This is awesome! I was looking for this feature for years. Thanks so much for this!

As someone who hasn't migrated, yet - and blogging on a daily basis - I hope it happens sooner, than later.

This option is not visible in my Display Options and I am on the new platform.

Liz, ditto. I'm still waiting too. The deadline for getting everyone on the new platform keeps getting pushed back. Wasn't it "two weeks" about a month ago?

As long as I'm complaining... these new features are great, but I'm still hoping for improved comment options. It sucks for blog readers to only be able to see the last ten comments. Often comments are the most interesting part of a post. TypePad needs to have better ways of keeping comments front and center.

Thanks! I am ready for this new feature...I often change the title of a post after the first saved draft, and it was annoying to have the filename "future-post.html"!

I must agree with the previous commenters. This is an awesome enhancement and should see more TypePad platfrom blogs move up in SEO rannkings.

You guys at SixApart have rolled out some fabulous enhancements recently; I can hardly wait to see what you'll make available to us next.

I'm already migrated to the new platform but I do not see the filename option on the display options screen What gives?

I hope you've had a chance to try out TypePad Connect: http://www.typepad.com/connect/

we just announced it last night, but give it a whirl if you're curious.

Just got an email from you that the new wonderful commenting feature is available and I should try it out. I attempted to do so and got a message that said:

"Sadly, we can’t support TypePad Connect for your blog just yet. We are aware of a few issues that would compromise your experience with this service and we don’t want to take that chance. We are working on getting these issues fixed so that you can have a seamlessly integrated commenting system for your TypePad blog as soon as possible."

Well, like another guy said in a comment above, some of us early TypePad adopters (over five years for me, I believe) have been waiting and waiting to get on the new page posting platform.

And now I'm going to wait to try out the new commenting features, which look like they're just what I've been asking for for well over a year -- after I got complaints from readers of my blog about how difficult it is to follow comments.

I appreciate this greatly improved commenting feature. But your policy of rolling out changes to TypePad to some subscribers way before others leaves some (like me) feeling out in the cold. What bad karma do I have that I'm neither able to use the new posting platform nor the new commenting feature?

Oops. Left my (frustrated) comment outside of this thread. What I said was, I did try to give it a whirl and got a message that TypePad Connect isn't available for my blog yet. How can it be offered by TypePad to every blog platform under the sun, yet a long-time early adapter of TypePad can't use it? Just like I'm not yet on the new posting platform. When you roll out new features to some subscribers way before others, you should expect frustration from those left out in the cold.

hey Brian - Ginevra here from the TypePad community team. I understand that all of our long-term users want all the features too, and believe me, we appreciate your support for us for all these years!

We're working on moving everyone over to both the new platform and new features as quickly and carefully as we can. It's not so much a question of "place in line" as it is how many posts and comments you've already got, and a lot of other factors. Basically, we want to make sure this transition goes as smoothly as possible for you and everyone else.

Please get in touch with me directly if you want to talk about this in more detail.

Thanks for the prompt reply. Much appreciated. I can handle a wait, so long as it isn't ridiculously long. It's just that when I saw your description of the new comment features I realized that this is just what I've been waiting for. So it bugged me to have to wait longer. I do have two blogs with lots of posts and many comments, so I can understand why my situation is more complicated than most. Do your best; I'll try to be patient.

Thanks, Brian. We really appreciate your patience with us. :)

Great job team! I'm so proud of us!

Speaking of glitches... I just got eight (!) identical emails letting me know about the reply to my comment. Looks like the new commenting feature needs a bit of work in this regard.

Sorry about the redundant emails, Brian. Are the emails identical?

what about linking search engine hits from my old blog to my new typepad blog? or do i have to setup a "redirect" on my old domain? (i own the domain) thanks!

I see that this is an old post, I am a B2Evolution user re looking options and other blog platforms. I am assuming that you are talking about a choice and one of them is a URL rewrite deal.