If there's anything we here at TypePad like more than dogs in hats and cupcakes with chocolate sprinkles, it's bloggers with ambitious goals, like cooking everything from the Alinea At Home Cookbook. 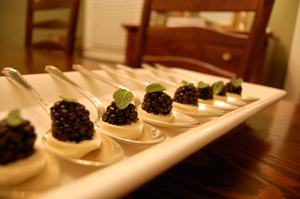 Carol Blymire started "French Laundry at Home" at the start of January 07 with the intention of cooking every single dish out of the 3 Michelin Starred Yountville restaurant's recipe book - a task made even more impressive by the fact chef Thomas Keller is widely considered not only as the most talented chef in the world, but his dishes are innovative, beautiful and incredibly difficult to cook.

That completed, and not content to rest on her laurels (in fact, more likely to sous vide cod cheeks with laurel leaves before serving it with a laurel and sea water foam), Carole switched to TypePad in October last year and began "Alinea at Home" to try and achieve the same goal with uber hip, up-and-coming young chef Grant Achatz's book.

We love not only her humorous and brutally honest write ups (which are even funnier when something goes awry) but also her self-deprecating good grace when proved wrong about a particular dish. And her taste in music isn't bad either.

I love Alinea At Home, Carole is doing an unbelievable job reproducing Grant's recipes. On Herbivoracious.com (also a TypePad blog of course!), I recently wrote this post about deadly food allergies, and what restaurants can do to avoid poisoning their customers. It would be terrific if you wanted to feature it on Everything TypePad as a way to get the word out. Here's the link:

Thanks for this, Michael! I'd love to get your blog featured sometime soon. :) just drop me a note!