Join the Official AVATAR Community on TypePad to win AVATAR tickets, an Xbox 360 and more! 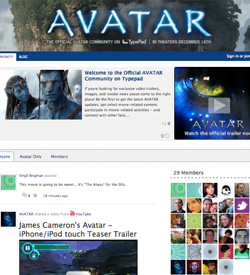 We’ve been counting down to the premiere of AVATAR, James Cameron’s epic 3-D adventure, ever since the trailer debuted early this fall, so you can imagine how excited we were to partner with Twentieth Century Fox to create The Official AVATAR Community on TypePad and an exclusive AVATAR-themed TypePad Micro blog.

The AVATAR community on TypePad is the perfect place for fans to share in the anticipation before the movie is released on December 18th and get the best AVATAR content from around the web. You can also see exclusive images, behind-the-scenes videos and real-time updates of AVATAR activity taking places on sites like Twitter, YouTube and Flickr.

Even better, when you join the community, you’re automatically entered to win a pair of AVATAR movie tickets. We’re giving away five pairs of tickets every day. Plus, every time you post to the community, you’ll get an entry to win an Xbox 360, AVATAR game, and other cool AVATAR prizes.

In addition to the community, true AVATAR fans can now show the world how passionate they are with a free AVATAR-themed TypePad Micro blog. As with all TypePad blogs, you can post from wherever you are, and update your Twitter and Facebook friends in the process.

AVATAR opens worldwide on December 18th, so what are you waiting for? Join the community now and enter to win!

First, I love the film.IMAX 3D!!! However, I'm really turned off by Cameron's blatant plagerism of artist Roger Dean. So many of the environmental and animal images are clearly influenced by Dean's works. I find it appauling that he was not given credit.