We're back for the second installment of Friday Roundup! Once again, we're sharing great posts that caught our attention. This week, we've got a slew of World Cup posts, some NBA Finals drama and a mix of other good stuff.

Now it's your turn! Share your favorite TypePad (or any blog!) post from the last couple weeks in the comments. 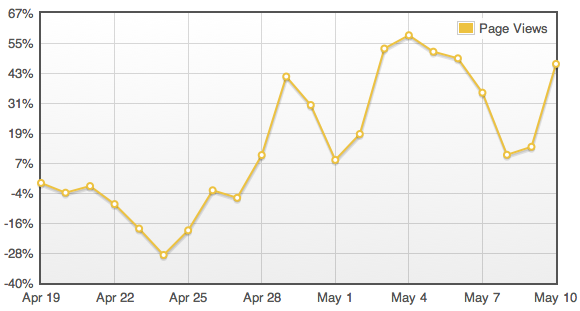 Lots of things are baking here at TypePad including this awesome new update that we'll be doing weekly. Check out the posts that made the rounds at our office. Keep your eyes open for a shout out on your own blog in the coming weeks. Like what you've read? Be sure to follow the linked profiles to stay up to date on these blogs. Until next week, we'll be seeing you at the ballpark. Have you seen a really awesome post on TypePad? Tell us about it in the comments! The first meetup will primarily focus on you, the TypePad blogger. We'll be answering questions, providing demos of the latest and greatest TypePad goodies, and attempt to connect userpics to faces. Folks from the team will be here so come by and say HI! even if you don't have questions. We'd love to meet you and hear your thoughts about the product. Our next gathering will be more developer-focused, with loads of information on the TypePad Platform API's and client-libraries.

We're open for ideas for future meetups, so chime in with your suggestions here in the comments. Looking forward to seeing y'all in the near future!

We held our very first TypePad NYC Meetup last week in the Six Apart office! Good turnout, good pizza, great bloggers. TypePad has changed a lot in the last few months, so we talked through the new interface and some of the new features. We covered better content management for bloggers, better design and discoverability tools (search!) for bloggers and their readers, and a ton of new community features that are just plain good for everybody. Here are some of the folks who attended and shared their blogs:

A few others stopped by to check out the latest in TypePad, including Vivek from Links Alpha, Eric from NY Drinker, and Andrew, a designer.  Thanks to all of the folks who made it out amidst the torrential downpour!

We want to keep these meetups useful and relevant for you, the bloggers, so be sure to check out our TypePad NYC Meetup group for polls and feedback from the event.  We'll be having meetups regularly in our offices, and the topics will rotate depending on your suggestions.

Not in New York? How about San Francisco? Keep your eyes peeled for an announcement about TypePad happenings on the West Coast!