WHO: Sean McCarthy
BLOG: The Comic's Comic
TYPEPAD MEMBER SINCE: 2007
WHY WE THINK THE COMIC'S COMIC ROCKS: This blog presents a unique perspective of the comedy industry - the inside! 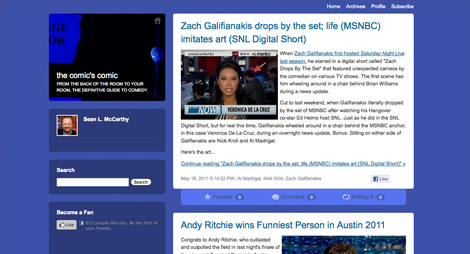 The Comic's Comic is brought to you by Sean McCarthy, who along with manning his blog has contributed to the New York Daily News, Entertainment Weekly, the Boston Globe, Boston Phoenix, BostonNOW, and the Boston Herald, amongst others! The Comic's Comic is the definitive guide to comedy, from the back room to your room.