BLOG: Cole Smithey: The Smartest Film Critic in the World
TYPEPAD MEMBER SINCE: 2005
WHY WE THINK COLE SMITHEY ROCKS: Cole Smithey lives in Manhattan and has been a film critic since 1997. He writes for more than 50 national, international, regional and online outlets. Movies have played an important part in Cole Smithey's life since he saw Francis Coppola's "Finian's Rainbow" at a drive-in cinema when he was five years old. It was when he first visited the Cannes Film Festival in 1991 that he discovered the enormous scope of world cinema, and he now returns every year to cover festival. As readers of his blog, we can take advantage of his razor sharp observations every day. 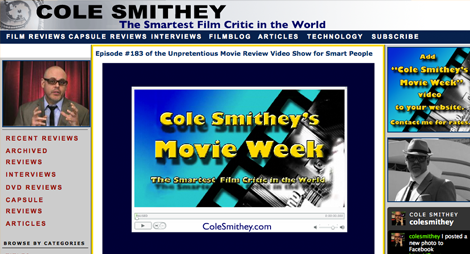