NAME: Brian Dickey
BLOG: Life as General Director of Chicago Opera Theater
TYPEPAD MEMBER SINCE: 2005
WHY WE THINK BRIAN DICKIE ROCKS: As General Director of Chicago Opera Theater, Brian Dickie knows exquisite music. He also has his finger on the pulse of the community and Chicago's arts scene, a position that has earned him the honor of being named by the Chicago Tribune as a “Chicagoan of the Year,” not once, but twice, and having garnered several other awards and countless praise from the community during his tenure. His blog focuses on his work as General Director and features captivating posts about his daily life, travels, and thoughts on opera and the Chicago arts scene. His blog is must for enthusiasts, certainly, but should turn the curious amongst us into opera lovers as well. 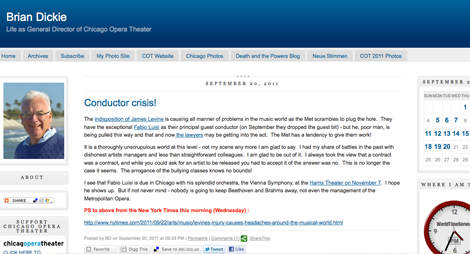