NAME: Doug French
BLOG: Laid-Off Dad
TYPEPAD MEMBER SINCE: 2006
WHY WE THINK LAID-OFF DAD ROCKS: Doug French is a writer and single dad who began writing Laid-Off Dad in June 2003, after losing his job when his first son was 15 months old. Since then, he has landed a full-time gig, contributed essays to several blogs and books, had a second son, became a single dad, launched a successful freelance career, created the Dad 2.0 Summit, and most recently, has moved from Manhattan to Ann Arbor. In the midst of it all, he keeps his readers captivated and entertained by the day to day life of a (not so) Laid-Off Dad. 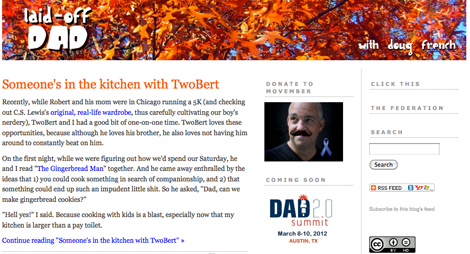