Typepad Showcase Learn More Heart Pricing & Sign-Up Login Need help?
The Boy Who Harnessed The Wind
Up And Away with Aviary!

NAME: Ruth Reichl
BLOG: Ruth Reichl
TYPEPAD MEMBER SINCE: 2009
WHY WE THINK RUTH REICHL ROCKS: She probably needs no introduction, but Reichl was the Editor in Chief of Gourmet Magazine for ten years until its closing in 2009. Before that she was the restaurant critic of the The New York Times, and both the restaurant critic and food editor of the Los Angeles Times. As co-owner and cook of the collective restaurant The Swallow from 1974 to 1977, she played a part in the culinary revolution that took place in Berkeley, California. It's safe to say that Ruth Reichl knows a lot about food, and she shares her passion and knowledge, along with beautiful photos and gorgeous prose, on her blog. 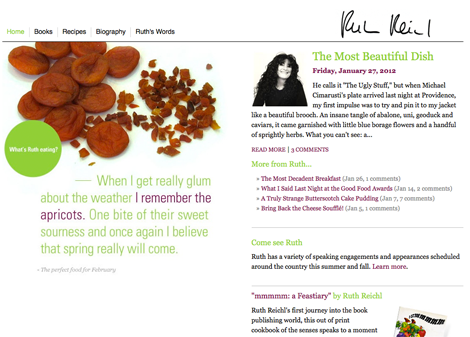