NAME: Richard Fulco
BLOG: Riff Raf
TYPEPAD MEMBER SINCE: 2010
WHY WE THINK RIFF RAF ROCKS: When a blogger knows his subject intimately, his blog is bound to be great, and Riff Raf is a fantastic example of that. Writer and teacher Richard Fulco writes plays and prose from his home in Brooklyn, but before that, he wrote songs for the many bands he played in. Some of those songs were performed at legendary New York City venues such as CBGB, Mercury Lounge, and the Bitter End. Now, Fulco writes about music in Riff Raf, a blog featuring great narrative pieces on a variety of topics (including the brilliant "Writers and Music," a series of discussions with authors about the music that moves and influences them), interviews, and retrospectives, to name just a few highlights. This is the blog for any true music buff. 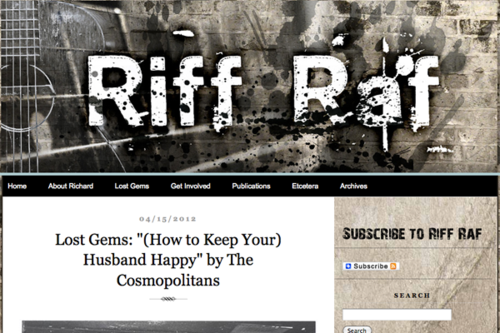