From Say Daily: What Makes a Brand Cool? 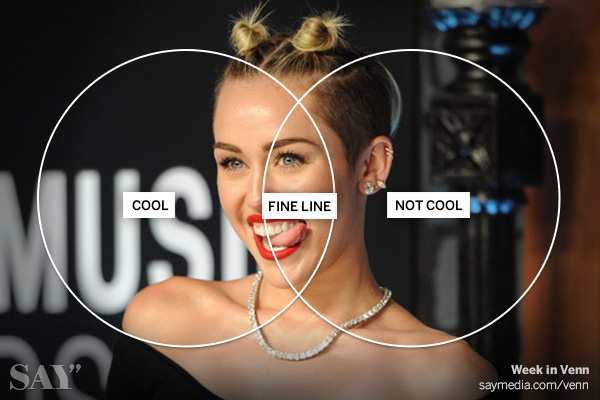 Miley stole the night, which is why the nation is still in recovery today.

If you're still wondering what exactly happened at Sunday night's MTV video music awards – let alone if it was cool – you're not alone. By traditional marketing measures, Miley Cyrus' VMA performance was a huge success: it was one of the most tweeted events of the year, generating up to 306,000 tweets per minute and 4.5 million social media mentions, which is more than the blackout or the Super Bowl. Miley’s just released new single jumped to the top of the Movers and Shakers list on Amazon on the news. And if you didn’t know what twerking was before, you probably do now. But is any of this cool? There are so many potential ingredients for cool, and so many ways to get it wrong. Let's break it down…

Sometimes using the word “cool” can be cool. Sometimes it doesn’t even mean cool. It’s like that scene from Donnie Brasco when Johnny Depp defines shades of “fuggetaboutit.” Cool can be fleeting, like this month’s Perseid Meteor Shower. It can be reaffirming, like the recent NY Times outage which further legitimized that all the news that’s fit to print might actually fit in the social stream. It can be generational, like a commercial using an 80’s track to tap into a feeling and pry at your personal sense of vintage.

The nation is still in recovery because of Miley? More like a nation in slow decline.

Its more of a reflection of how much we have regressed as a society. I find nothing cute or sexy about her. I find her repulsive, I'm sorry. But also a good reminder of how much I need to stay involved in my own daughters' lives to guide them as much as possible.

I don't get this Miley Cyrus, I feel bad for her father. He says he supports her, but you know deep down inside he is extremely disappointed and hurt. I can see it through his comments which are carefully constructed.

Anyways, enough talking about this disturbed individual. I never followed her before and I am no following her now.

The demise of culture and civility? Only if you buy her music.

You don't have to buy her music to be exposed to her antics. People who watched the VMAs were not all buying her music.

I just have been in this world for 50 years and I have seen the steady decline is standards when it comes to this kind of stuff. Kids today have less and less respect for their fellow man and themselves. Its just a fact.

I don't follow her, not into drama, although I am creating a bit of it here. I just happened to stumble on this blog while revising my own blog and just thought I would share my 2 cents, probably all it is worth! :)